BRIDGE
Cant say yes, won’t say no, Maybe tomorrow
Faces all around me, maybe that’s the way I like it
Maybe tomorrow

VERSE TWO
Our friend all think we’re crazy
And the birds are worryin’ ‘bout it
And all the fool choices we make
There’s gotta be a way, boy, that we can work it out
But it just never seems to take it

BRIDGE
Cant say yes, won’t say no, Maybe tomorrow
Faces all around me, maybe that’s the way I like it
Maybe tomorrow

CHORUS
I’m learnin’ how to love, love,
Shoulda learned it by now
I’m learnin’ what the truth it
I’ll find it some how
Just like , see me in need of a little rebuilding
See the gunshots, ages old, there to remind you
Despite the chaos there’s love, waiting for you
Just find the heart of me, I’m waiting for you
In
Tell me what’s true
Oh
Is it you?

Hello, all! Happy new year. It is 2017, arbitrarily and confusingly the beginning of the year in the middle of everything, and while it is part of our consciousness and has been since the dawn of the Julian calendar or probably before that and I'm sure someone will tweet at me the proper information, I think mostly we humans just love to confound everything and make life wonderfully impossible and full of delightful complications, like having a new year in the middle of 8th grade.

2016 was my breakthrough year. I broke my dinosaur MacBookPro and am instead, for now, using my significant other's old roommate's old computer from college (Go Trojans, I guess! Circa 2005 or 2006, this computer and I have lived in LA the same amount of time, so that's cool.) The political system was broken open, or so the ubiquitous *they* will tell you, but we ancient poets know that it's just a variation on a theme and art is where it's at, always has been, always will be. I won't go through the deep losses of the last year except to mention the loss of a personal hero to me, Leonard Cohen. When I'm old, I hope I rock fedoras like he did. As I am young-ish still, I wear them only sometimes, but I aim to be as fashionable and styling as he was, only in a female glamour spy manner.

Speaking of spies, Carlo and I filmed a teaser for our new web series, "Spy V Spia!" It's really a proof of concept, designed to show viewers and potential investors (such as yourself?) the relationship and sexual tension between the two leads (conveniently located here in our apartment, LOL.)

"Spy V Spia" is a will they/ won't they romantic comedy with a spy parody twist. Two rival international spies accidentally become neighbors and form a love hate frenemy state, until ninjas attack, and our unlikely buddies must band together to save the world. The show itself will have stunts, evil organizations, Bond boys and Bond girls, plenty of Minnesota and Italy jokes, and even a tiny tiny tiny tiny blippet of opera. It also has an awesome theme song composed by Mark Mallman and sung by yours truly, coming soon. But until then, you can watch the Proof of Concept video clip here!

I am so passionately excited about life this year. I am attached to star in a new TV show as a police detective, "Emergency: LA," and another project I wrote with my excellent bosom friend Anzu has a wonderful and successful showrunner attached (but we can't say anything about that just yet!) I'm brunette again and planning on doing some live streaming singing concerts in the next few months as I prepare to sing alongside a Russian choir for a movie filming in Sardinia and raise money to shoot the web series mentioned above. I'm still writing away at a novel (every morning at least a little bit) and while my holidays were wonderfully relaxing (dead computer = no computer in Minnesota = no distractions = lots of the lost art of reading!) I am thrilled to be moving and grooving in 2017.

But make no mistake, I am still working my day jobs, for which I am grateful, and working on getting fit for "Emergency: LA" while not getting too crazy about eating (file under: eating disorders and "StandUpera," my one woman show) and I have a few personal goals: be a better friend and family member this year.

I'm (re)-reading:
"Man's Search for Meaning," by Viktor Frankl
"The House of the Spirits" by Isabelle Allende
"Romeo & Juliet" by Wm. Shakespeare

I'm reading for the first time:
"The Big Leap" by Gay Hendricks (trying to kick my self help habit but then, why?)
"A Man Called Ove" by Fredrik Backman

I'm watching:
"The OA" on Netflix

and I cannot WAIT to see
"Toni Erdmann" the film.

I'm listening to:
"Lala Land" soundtrack
"The End is not the End" by Mark Mallman

I'm thinking about American Impressionist and Expressionist painter Jane Peterson after seeing a private collection of her works at a dear friend's. I'm wondering how to make millions so I, too, can invest in art and the fostering of creatives (starting with myself.) 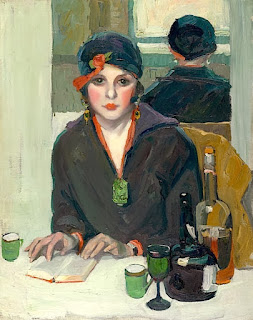 I'm also thinking about pink champagne (like the kind I drank on New Year's Eve), tiaras and rhinestone headbands, the roaring 20s and the state of humanity. When I get to that final thing I'm pondering, I shut down, take Henry Monster for a walk, and regard the cacti plants in the gloomy southern California drought. For now, it's better that way, since the revolution is within and therefore will be televised but through the creations of characters and stories that tell us who we were, who we are, and who we are not, as we push up against the witnessing of storytelling, our ontological beings at the fire of Netflix and Amazon and YouTube.

This quiet dust was gentlemen and ladies
And lads and girls;
Was laughter and ability and sighing,
And frocks and curls;

This passive place a summer's nimble mansion,
Where bloom and bees
Fulfilled their oriental circuit,
Then ceased like these.

And let me close with a little bit of the classic rock band, Kansas, or better yet, the classical pop crossover delight Sarah Brightman's version of their hit, "Dust in the Wind."