VIDEO WEDNESDAY! May we all be like THIS gal! Happy Holidays!

Follow this link to UpWorthy's website, read the story and watch the video. What a great gal!
xoXOXO


http://www.upworthy.com/when-a-97-year-olds-drivers-license-was-revoked-she-went-to-get-it-back
Posted by Erin at 12:38 PM

The Holidays Bring that $hit Up: on lackluster holidays and the return of wonder, The Philadelphia Story and (wo)man's search for meaning.

The puppy is off at his babysitter's, after I spent four days watching the sitter's two dogs while SHE was out of town. The house feels empty without my little boy (furbaby!) and last night I spent the evening watching "The Philadelphia Story," which is not a holiday classic per se, but which brings up every feeling of womanhood I am experiencing right now.

Well, not exactly. I'm not torn between three men, and I'm not a wealthy equestrian.

But I am all those other things that Tracy, aka Kath Hepburn, is in that movie. A goddess learning to be human, and vice versa.

In 2015, that comes off very differently than how it was used when "Philadelphia Story" was made. In 2015, we have connotations of New Age tarot decks, yogini worship of Qwan Yin, Wiccan idolatry. I myself have participated in at least two of those three. 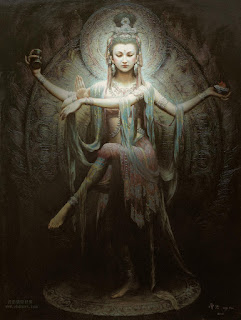 But I mean it in the way that ALL humans, especially today, need to return to their bodies and get back into being human- a real human being.

We- okay, I'll speak for myself- I need to feel. I need to remember the awe of Christmas, and if not Christmas, then awe in general. This year I don't have a tree, I only did a couple of gifts, and I haven't made any cheesecakes or cookies at all. Historically, I have always loved Christmas and the magic of the dark silence of a wintry woods. Now, I live in a concrete jungle full of billboards and plastic surgeons and diet programs and celebrities famous for being talentless. I'm sorry, but where is the wonder and awe in that?

In my heart, of course. That's the answer. *I* am the poetess. I am the singer, the muse, the creator of worlds and characters and laughter and love.

So how can I give to myself?

What am I craving?

I don’t usually get too wild in my mood swings any longer, but lately I have been feeling a bit of a nihilistic sense of pointlessness. Then I think to myself, as soon as I catch myself wallowing, I say, "Well, Erin, you know how to practice joy, fun, sensuality, giving, being of service, gratitude. So even if part of you feels this is all bullshit, just keep loving and giving. You’ll get out of your crappy attitude and back into divinity fast."

Usually it takes only a moment. Lately it has been taking me a day or even a few days.

Either I’m losing my touch, OR I’m going through something, OR I am at a new strata, a new level, and so while it is actually better than ever before, it FEELS less effective because my personal barre has been raised…

Or a little of all of the above.

(In other news, don't you hate the meme "take it to the next level?" And yet it is SO very useful, that phrase!)
What am I craving?

Endless spritz cookies and egg nog with rum, sure, yes.

What am I craving?
I am craving serenity- peace in my heart- and lovingness. I crave wonder. Excitement, possiblity, opportunity, a feeling of purpose, yes. I am craving awe. I am craving that feeling I had after I received in a vision on top of Prophecy Rock* in the Hopi village of Oraibi, where I felt SO in love with the world as it IS (life on life's terms!) and in such bliss that every cell in my body felt so much  pleasure and pain and joy and sorrow and bliss it was orgasmic but not in a sexual sense- well that was in there- but in every possible sense and even beyond.

That just got at once very intimately personal and very mystical. But I feel that if I am to share any learning in this blog with ANYONE who reads it, I will give an account of my honest experience in life, so as to encourage all of you to live YOUR life, or maybe just because sharing what I have discovered in my exploration of the world is PRECISELY how I feel alive in the world- as Hepburn's Tracy says at the end of "Philadelphia Story," "like a human... like a human being."

But back to bliss.
Perhaps it is possible to feel that way all the time- Jesus, Mother Mary come to mind.

Of course I am none of those folks- Jesus, Katherine Hepburn, Santa Claus, Mother Mary, not even you. I am you, of course, and I am all of those folks. They live in me and I live in them. I am none and all as are you as are all of us.

So, what would life look like if I gave myself even more permission to let go of what I don't want- nihilism, in this instance... it's fine for some Übermensches, but not for me....

I had a great teacher once who taught the lesson of going just outside your comfort zone. She taught it in numerous ways. She taught us to “stay beyond the mind,” meaning, if your mind tells you it is time to leave, stay just a little longer, just long enough to see if your mind isn’t changed and learning occurs. She taught us that most people have one or two responses to stress, A and B, but taught us to create a triangle of response by being willing to find an option C- any option C- just be willing to find something new, something we have never thought to think or do before. I started applying this to my life in all sorts of ways. I started waking up in the morning saying to myself, “Today, I want to see three things I have never noticed before.” “Today, I want to think thoughts I have never thought to think before.” “Today, I am willing to find an opportunity to go beyond my mind, go beyond my norm, go beyond my comfort zone.”

It becomes a little addictive, actually.

And yes, with that, I went back to school for opera, I did tons of one woman shows, I traveled many times to India and Europe, I “did” and will always DO amazing things.

But the most interesting application in my life is in my day to day relationship with my most intimate friends and family, and with myself.

And if I lived that way all the time? Well, perhaps I do...

No idea. But I’m open to not knowing and letting the mystery unfold.

*Perhaps someday I shall post that story, of Prophecy Rock. Perhaps I am saving it for my proper memoirs. LOVE!

I shall close by quoting Robert Frost, who said everything so much more beautifully in this:

Stopping by Woods on a Snowy Evening

By Robert Frost
Whose woods these are I think I know.
His house is in the village though;
He will not see me stopping here
To watch his woods fill up with snow.


My little horse must think it queer
To stop without a farmhouse near
Between the woods and frozen lake
The darkest evening of the year.


He gives his harness bells a shake
To ask if there is some mistake.
The only other sound’s the sweep
Of easy wind and downy flake.

Fiction Fridays, The Art of Observing, and Things We Learn From Our Sisters/ Ourselves.

I have been slowing down a bit for the year, writing about 3-5 pages a day on the novel. As you may know if you've been following the blog, Carlo and I finished our umpteenth draft of our screenplay and have sent it to a few connections in the industry as a first round of marketing. We also entered a few competitions of note, just to see what happens there as well! We read that screenplay competitions, at least the ones we're entering, get between 7000-11,000 entries each year! And yet, I have two friends that have won notable competitions! An acquaintance friend from acting class won the Nicholls a few years back, and another friend (guy I briefly dated) won Slamdance. So, something about osmosis is going on? LOL. No, yes, maybe, who knows? At least I know that I am surrounded by gifted friends and colleagues and keep very good company. :)


In other news, today is a very special sister's birthday, and in conjunction with slowing down and reading a little more, watching some old spy movies and TV classics for inspiration for my next project with Carlo, and writing (less, but still!) on the novel, I am doing a bit of reflecting on the spirituality and beauty and peace I have learned from my experiences.

Here's what I wrote today: