Over on my day job blog, I wrote this article, and thought those of you who read my personal blog would enjoy it. xo


Yes, the heart can break- and it can break open.

I often say, live long enough, and life will happen.

And “life” is full of joy AND sorrow. We all know that, of course, but when LIFE is happening to us full force, and usually we become aware of the extreme details of the present moment in times of sorrow, danger and shock, we forget that THIS is a part of the gift of life, too. This hurt. This pain.  This sorrow. And that it is not happening because we were bad or didn’t hold the perfect affirmation or mantra the right way in our heads and hearts but because…

I got mugged once at gunpoint at a drive through ATM. I was totally broke at the time. I was driving through at about 9 PM, at a bank where the drive through ATM was maybe 100 feet from the curb. It was a Monday evening in a busy part of Studio City, CA. There were people walking by. I had about $10 in my checking account and had just given a massage and had $100 cash to put IN to my bank account. I drove up, put in my card, hit the PIN number, and then leaned over to grab the cash out my purse when-

I felt something hard against my head.

A boy, or young man, in a ski mask, stood at my driver’s side, holding a gun to my head.

Another boy, or young man, stood to the right of my car and knocked on my window to let me know HE was there, too.

My heart stopped. Time slowed. I remember that I had clear, extremely reasonable thoughts: “…if they try to get in the car, I will drive off and risk getting shot, because THEN they will probably bring me to a gang house and… the worst. If they just want money, they can have it, I will just try to get out of this as quickly as possible.” I recall that a couple walked by, not 75 feet from me, and either didn’t notice what was happening or didn’t care. I believe they didn’t notice, because eventually, someone would have dialed 911, right?

The boy at the ATM tried to get cash out but he couldn’t.

I was holding the Benjamin I had just earned in my hand. He took it, and asked,

“Gimme your phone,” he said.

His hands were shaking.

I gave him my phone.

“Get out of here,” he said. I drove off, and then my heart raced.

Later, the police were at my house, questioning me, fingerprinting the car. I heard on their walkie talkies ANOTHER robbery at another ATM, same exact format. Probably the same boys.
The cops were much angrier than I was. I found that nice, but weird. They kept telling me they were gonna “get these guys” and that the guys “would pay.” I understood that was the job of the police. I actually spent a lot of time with them and learned about them. One was a veteran of Afghanistan, from a long line of police in his family. The other needed a job and this was one.

But I felt so bad for those boys, or men, who had not only mugged me but threatened my life to get money. First of all, they were obviously either a) on drugs (they were skinny and shaky) or b) new at crime (they were skinny and therefore probably young and shaky) or c) joining a gang (probably a shortened life there) or d) just really wild and dumb kids on a crime spree. Their guns were real, although I don’t know if they were loaded, and wouldn’t have wanted to find out…. or at least their guns were VERY real looking. I am not an expert but I have gone shooting several times, grew up around guns and hunters, and (now) am romantically and life-partnered with a former Police Captain. So… it was real enough.

But these dumb boys, they were targeting some broke massage therapist slash actress (it was about two years before I started working with 12Listen,) they were at worst getting into drugs and crime and there is no future in that, or at the other worst, just a$$holes.

I prayed for them. I prayed for them, for the police officers who were probably just a few years older than the criminals who were endangering themselves to stop crime, and then, I prayed for my bank account. (I mean, I did. It’s the truth.) And I never went to an ATM after dark again unless it was right in front, on the busy street, where there were LOADS of people.

Why am I telling this story in a blog about heartbreak?

I don’t know, but it seems like the right context to share the next part of this blog.

Recently I have gone through a few heartbreaks again in life, less painful than some I’ve encountered thus far in life. Not the worst, is what I’m saying, but… it doesn’t make it any easier to go through.

Years ago, long before getting robbed, long before going to India, but not THAT long before… when my heart would break, I would turn into a dramatic mess. I would sob, and wail, and go for long walks in the woods reciting very depressing 19th century poetry, and listen to a lot of depressing music by songwriters who died young or committed suicide. (poetry by Christina Rosetti and Arthur Rimbaud, music by Jeff Buckley and Mama Cass and Elliott Smith.)

These days, I don’t deny my feelings, but I let it wash over me. I still go for my walks and I look very closely at nature. I listen to the wind in the trees. I touch the hard wood, feeling its roughness over my soft skin. I give nature my sorrow and it returns new life force to me in return. A shaman once told me that when we have emotions like sorrow or anger, we should go to the earth, give it to the earth, because the earth needs our humanity as much as it needs our carbon dioxide, that it’s part of the symbiosis of our lives as natural beings.

I give the Earth my humanity, and it gives me in return a call from the divine, from the holistic Earth-Divine-Cosmos continuum, from Brother Sun and Sister Moon:

A whisper soft and low, but that yet I can hear, nay, feel in the very core of my being, from my beating heart to the marrow of my bones:

“Yes, yes, my child, let the heart break, for it breaks open, open to the blue firmament of sky, open to the laughter of children in a distant place, open to the birds and the breeze and the orchestra of life happening all around you.”

Don’t hide from your life. 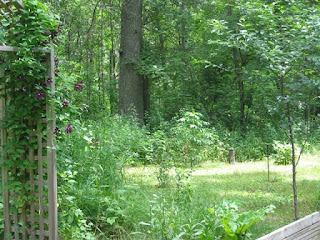